Authorities order radio stations to be closed in the DRC 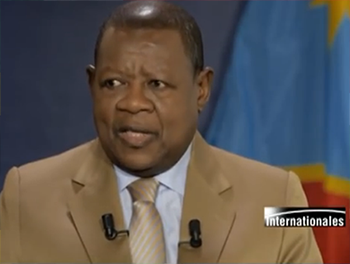 Nairobi, November 24, 2014–The Committee to Protect Journalists today calls on authorities in the Democratic Republic of Congo to stop meddling with radio station broadcasts in the country. The Congolese Information Minister Lambert Mende has called for the shutdown of several radio stations in recent weeks, and a few have gone off the air.

“The orders to close several radio stations appear to be aimed at silencing critical voices,” said CPJ East Africa Representative Tom Rhodes. “We call on Congolese authorities to let journalists do their jobs, and to follow due process for regulating the media.”

On November 20, Mende issued a statement that was aired on the state-run Radio Télévision Nationale Congolaise (RTNC) in which he called for the shutdown of the independent broadcaster Radio Television Lubumbashi Jua (RTLJ) in southeast Congo, according to news reports. The statement accused the station of incitement and insurrection but did not elaborate, according to news reports and local journalists.

Local journalists said they suspected the statement was linked to the recent departure of Jean-Claude Muyambo, owner of RTLJ, from the ruling party and his criticism of a government proposal to change the constitution to allow President Joseph Kabila to run for a third term in 2016. Muyambo’s comments were aired on RTLJ.

The station is still broadcasting. According to news reports citing Congolese law, the Higher Council for Broadcasting and Communication (CSAC) has authority over broadcasters, not the information ministry.

CPJ’s calls to Mende and his deputy chief of staff, Pascal Amisi, were not returned.

Mende has also ordered the closure of other stations in recent weeks. On November 14, in another statement broadcast by RTNC, Mende ordered five community radio stations–Radio Télévision Graben Beni, Radio Liberté Beni, Radio Télévision Rwanzururu, Radio Ngoma, and Radio Furu–in the Beni region in the eastern province of North Kivu to be shut down, according to news reports.

The minister said the stations had incited the public against the government and United Nations peacekeeping forces and had maintained close links with a rebel group, according to news reports. The Ugandan rebel group Allied Democratic Forces – National Army for the Liberation of Uganda, formed in 1995 to resist Ugandan President Yoweri Museveni and establish an Islamic state in the country, have conducted several deadly attacks in the Beni region, using the region as its base of operations, according to reports.

According to a statement by Bernard Munsoko, executive secretary to the independent media regulatory body, the Congolese Media Observatory, Radio Ngoma has been off the air for more than a year. Radio Furu does not exist, local journalists said.

Another station was also shut down in October. The acting governor of Equateur Province in northwest Congo, Sébastien Ipeto, verbally ordered the suspension of the privately owned station Radio Equateur for hosting a talk show in which guests criticized Ipeto for overstepping his authority, according to the Congolese-based press freedom group, Journalists en Danger (JED). The station remains off the air, JED Correspondent Tuver Wundi told CPJ.