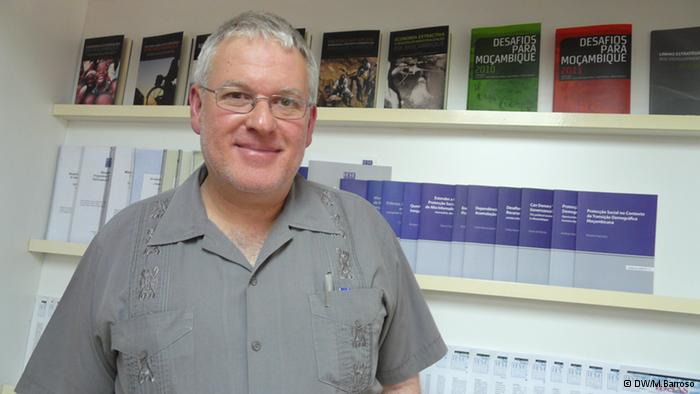 Prominent Mozambican economist Carlos Nuno Castel-Branco told a Maputo court on 24 August that a Facebook post he wrote in November 2012 was intended as part of a political debate on the problems the country faced, and not an attack on the honour and dignity of the then president, Armando Guebuza.

Castel-Branco is on trial before the KaMpfumo urban district court for supposedly libeling Guebuza in his Facebook post. Since libeling senior political figures is classified as a crime against state security, it is not Guebuza himself who brought the case, but the Public Prosecutor’s Office.

Fernando Mbanze, editor of the independent newssheet “Mediafax”, is in the dock alongside Castel-Branco. He had republished the Facebook post, and now finds himself accused of the crime of “abuse of press freedom”.

Guebuza has made no comment on the case, and there is no indication that the prosecutors even questioned Guebuza.

The prosecution claims that various of the statements made by Castel-Branco in his post were untrue, including his opening line “Mr. President, you are out of control”.

It also did not like the claim that Guebuza had surrounded himself with “boot-lickers”, or that he had repeatedly insulted “those who have ideas about national problems, rather than creating opportunities to benefit from their experience and knowledge”.

The prosecution claims, in a willful misreading of the post, that Castel-Branco had compared Guebuza to fascist dictators. In fact, the post warned, not that Guebuza was a fascist, but that his governance might pave the way for fascism.

The politico-military crisis of 2013, Castel-Branco wrote “makes us remember the preludes to fascism. In similar situations, Hitler, Mussolini, Salazar, Franco and Pinochet were installed in power, and were defended by big capital as long as they defended the interests of big capital”.

“I did not compare the former president to fascists”, Castel-Branco told the court. “But the processes in Mozambique are similar to the processes leading up to fascist dictatorships”.

As for saying that there bootlickers around Guebuza, he pointed out that many others had made similar claims – including senior figures in the ruling Frelimo Party, such as the former head of the Frelimo ideology department, Jorge Rebelo.

Castel-Branco was once close to Guebuza. In 1977, when he was just 17 years old, he joined the revolutionary armed forces (FPLM), and was placed in the FPLM political commissariat, which was headed by Guebuza. Three years later, it was Guebuza who ensured that Castel-Branco went to university.

At the time, they shared a common ideology – both defined themselves as socialists and as Marxist-leninists. Asked what had changed since then, Castel-Branco, citing former Greek finance minister Yanis Varoufakis, replied “I didn’t change – the boat changed its direction”.

As for the publication of his Facebook post in the Mozambican media, he said that he had neither authorized it or denied permission to republish. “I am not going to exercise censorship against the Mozambican press”, he said.

Mbanze told the court that the post had been discussed in the “Mediafax” newsroom, and the journalists agreed that it was part of an important debate of ideas, and was therefore worth publishing. No-one in “Mediafax” had construed it as libelous or insulting.

“Had we concluded it was libellous, we wouldn’t have published it”, said Mbanze.

It is strange that the case has come to trial at all. For last year the Mozambican parliament, the Assembly of the Republic, passed a law amnestying security offences “of any nature” committed between March 2012 and August 2014. Clearly, this covers a Facebook post of November 2013.

The prosecution has not explained how it can override words as categorical as “of any nature”. But Castel-Branco and Mbanze deliberately did not base their defence on the amnesty law. Instead, they argued that the post was a legitimate part of a national debate.

Castel-Branco’s lawyer, Joao Carlos Trindade (who is a retired Supreme Court judge), said his client was not invoking the amnesty law, “because he prefers to be acquitted, since no crime was committed. Accepting an amnesty would be to accept that he committed a crime”.

Trindade regarded this trial as a litmus test. “What is at stake is whether we live in a democracy or in a dictatorship where people are gagged and cannot express their views”.

“As a court, we have to tell the world what sort of country we are living in”, he said. “In no democratic country is someone condemned for criticizing the way the President is ruling”.

Presidents should be prepared for scrutiny by the public, he added. “They have duties towards citizens, and citizens have to be vigilant to ensure that they are not defrauded”.

Trindade quoted sociologist Elisio Macamo, a well-known supporter of Guebuza, who in December 2013 had declared his shock at the decision to prosecute Castel-Branco and Mbanze. “I am astounded by this”, he had written. “What kind of country do some people want to build. As a fan of Guebuza, I can’t believe he is behind this”.

Macamo did not agree with all Castel-Branco had said. “The content of this text is debatable”, he wrote. “But since it is debatable, it ought to be debated”.

The defence produced several witnesses, including a former deputy chairperson of the Mozambican parliament, and later head of the government’s Legal Reform Technical Unit (UTREL), Abdul Carimo, and former deputy agriculture minister Joao Carrilho. It cannot plausibly be claimed that these men are opposed to Frelimo or the government – yet they, and every other witness, saw nothing libelous or insulting in the Castel-Branco post.

“I don’t see any intention to offend the dignity and honour of Armando Guebuza”, said Carimo. “The article is a cry from the heart. It has a lot of adjectives, but there’s no attempt to offend”.

The prosecution, on the other hand, did not present a single witness. It brought forward absolutely nobody who claimed to have been scandalised by the article.

Presiding judge Joao Guilherme announced that the panel of three judges court will give their verdict on 16 September. The delay of more than a fortnight was due to pressure of other work, he said.