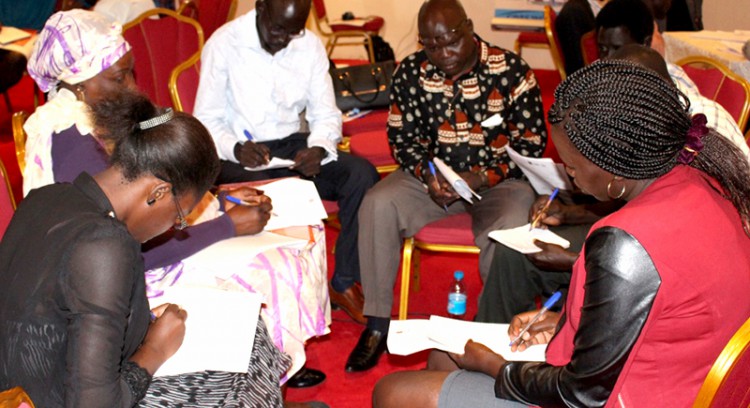 A two-day conference held in Juba to mark International Day to End Impunity for Crimes against Journalists (2 November), has recommended decriminalization of defamation as is contained in the South Sudan 2013 Media Authority Act. It also appealed to the government to speed up investigation of the seven journalists killed in South Sudan, with a view to end impunity on crimes against journalists and eliminate the country’s rating on global impunity index.

The conference was organized by the South Sudan media sector thematic working group on Safety of Journalists and the Issue of Impunity, which is convened by UNESCO and co-chaired by the Union of Journalists of South Sudan (UJOSS) and the Community Empowerment for Progress Organization (CEPO).

With the support of UNESCO, the Swedish Government – through the Swedish International Development Agency (SIDA), the Norwegian People’s Aid (NPA), Albany Associates, and the Viable Support to Transition and Stability (VISTAS, a USAID funded project), the conference provided a multistakeholder platform to discuss the role that different media stakeholders should play in ending impunity for crimes against journalists and improve the media situation in South Sudan. Drawing over 100 participants from the media community, the conference was attended by high-level representation from the line ministries such as the Ministry of Interior, Central Equatoria State Ministry of Information, Broadcasting and Tourism, the National Ministry of Information and Broadcasting and the ministry of Justice. Ambassadors and senior staff from the diplomatic community, human rights defenders, academia, and the civil society were also among the participants.

While officiating the opening session of the conference, Emmanuel Adel Anthony, the Central Equatoria State Minister of Information, Broadcasting and Tourism, reiterated the Ministry’s support in addressing the concerns of the media sector in South Sudan and urged partners to support the Government of South Sudan in strengthening the various legal institutions to address impunity concerns. Paul Jacob, Director-General in the National Ministry of Information and Broadcasting, reiterated the importance for media professionals to work in a free and safe environment.

“The near complete impunity for the perpetrators of crimes against journalists goes against everything that we stand for, our shared values, our common objectives,” declared UNESCO Director-General Irina Bokova in her message to Member states during the Second International Day to End Impunity for Crimes against Journalists. Awol Endris from the UNESCO Juba Office called on the government of South Sudan to speed up investigations and bring to justice those culpable of the killing of journalists in the country. “The contribution of the media to the democratization process, for the observance of the rule of law, and for the accountability of public office holders cannot be overemphasized. It’s for this particular reason that the killing of journalists, and the impunity with which it is done, is and should be of paramount concern to all of us,” said Mr Endris.

The representative of media owners in South Sudan, Alfred Taban, raised concerns over the increased rate of killing of journalists in South Sudan, regular closure of media houses, and journalists’ harassment. “Killing of journalists and closure of media houses have been on the increase and are not acceptable! Being rated second in Africa and 5th globally on impunity index is really bad and there is no excuse for being a young nation,” said Alfred during the panel discussion on media dialogue with police and national security bodies.

Monday Enoka, the South Sudan national police service spokesperson, reiterated the police service commitment to ending impunity through respect to freedom of expression, supported the ongoing media and police dialogue, and called on more training for the security personnel to ensure they better understand the role of the media in the development of the country. “Capacity to enforce law by the South Sudan National Police service needs to be strengthened,“ said Enoka.

UNESCO, as the UN-lead agency in promoting freedom of expression and of the press, urges all media stakeholders and development partners in South Sudan, as one of the five countries that accepted to implement the UN Plan of Action on safety of Journalists and the issue of impunity, to join efforts in ensuring safety of journalists and ending impunity for crimes against journalists.

This article was originally published by UNESCO.